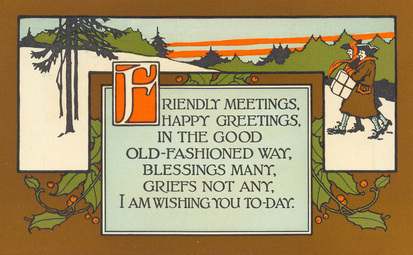 Image Courtesy of: http://www.postcardy.com/article04.html
Albert M. Davis, a manager of a wholesale book house, received a New Year’s greeting from a friend. This inspired him to publish similar greetings on high grade paper stock and sell them. From this initial printing of 8 cards, he developed a post card business. With the success of post cards, he added envelopes and decorative designs. According to Chase, “these were part of the foundation of what is now known as the American Greeting Card.”[1] Eventually Davis would retire and his master file was purchased by Rust Craft Greetings. 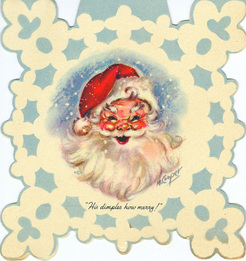 Image Courtesy of: http://www.flickr.com/photos/contrarymary/
Fred Winslow Rust, a collector of Prang prints, also opened his business in 1906. He published his first Greeting Cards that year and revolutionized the use of the “French fold” and the envelope as we know it today. [1] The business grew rapidly in its first five years and Fred’s brother, Don came aboard to handle the manufacturing and finances so Fred could focus on creation and sales.  Many of the “firsts” in the greeting card industry belong to Rust Craft, including Anniversary and Graduation cards. They also developed a stock control system that many publishers would come to use. [2] Rust Craft was a successful greeting card company for a number of years and was purchased by American Greetings in 1980.[3]

The Keating Company was founded in 1906 in Philadelphia, one of many companies founded that year.  It was founded by WD. Keating and then taken over in 1909 by Howard Betelle, who helped found the Greeting Card Association in 1913.[1] The company had fallen into decline by the 1950’s and there are no records of when it closed or was purchased.

Image Courtesy of: americangreetings.com
American Greetings was founded by Jacob Saperstein, a Polish immigrant who found his way to Cleveland Ohio and began reselling German postcards. According to American Greeting’s history, “To start his business, Jacob borrowed $50 from a local bank to buy a supply of penny postcards, which he sold to drug stores, novelty shops and confectioners. By the end of the first week, he had sold enough cards to repay the loan, and had an extra $50 to fund the following week's business.”[1] Along with his family, Jacob would turn this small operation into a major venture. By 1921, Jacob was taking home about $1000 a year and his success would continue despite the depression and two world wars. Eventually American Greetings would buy out many of its competitors including Carlton Cards, Rust Craft, and Gibson Greetings.

Founded as the Gibson Art Company in 1908, Gibson Greetings was one of the major manufacturers and retailers of greeting cards until its purchase by American Greetings in 2000. [1] The company began as an importer of German cards and then once they understood the American market, set out to design and sell their own cards. This preparation served them well, “with a large sales force already in the field and with sixty years of preparation behind them, they forged ahead faster than the other early publishers and soon became one of the largest manufacturers in the country.”[2] Many of their cards and designs are considered iconic, and many treasured greetings tucked away in boxes or scrapbooks bear the Gibson logo. 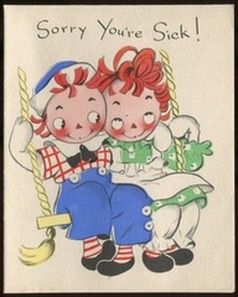 Image from pintrest, no credit found.
The PF Volland Company was founded in Chicago in 1908. Paul Volland, its founder, “was a native of Germany with a genius for knowing beautify in design and with the Teutonic desire for perfection in printing.”[1] He was the first to add mottled effects on his cards and helped advance the “offset process” in production. Volland was shot and killed by a mentally ill woman in 1919 and the company was continued by F.J. Clampitt.[2] The Volland company is most known for their production of Raggedy Ann and Andy products which were copyrighted by the company in 1915 and produced by the company until the 1930’s.[3]  The company folded after the depression, unable to continue production at the same quality and level. “After the 1929 stock market crash quality suffered slightly as they were forced to use cheaper paper and covers in order to cut costs. By the early 30s, not even Gruelle's success could keep the company afloat and in 1934 they abandoned the book business altogether, selling the artwork for Gruelle’s books to M.A. Donohue. ”[4]

Image Courtesy of: Hallmark.com
Joyce Clyde Hall started out the same way as Jacob Sapperstein, by selling postcards. Later, his brother Rollie would join him and despite many obstacles they developed a successful business. They realized that the industry was changing, and “As postcard sales declined, they recognized the public's desire for more privacy in their communication, so they started offering high-quality valentines and Christmas cards mailed in envelopes.”[1] Together Joyce and Rollie developed a business that, although destroyed once by fire, was able to outlast most of their competitors. One of the most significant moments in Hallmark history came in 1932, when Joyce “recognized the possibilities of the Walt Disney drawings for greeting cards and made arrangements to incorporate them in his line.”[2] The agreement signed between Disney and Hallmark is still in effect to this day.[3] Hallmark also developed a Christmas Ornament line and a customer loyalty program.

Image edited from: http://jonwilliamson.com
Norcross was founded in 1915 by  Arthur and Jane Norcross, a brother and sister pair in New York. They were well known for “beautiful personal greeting cards, many consisting of copper plate etchings, dry points and gravures on hand-maid papers, each painstakingly hand colored with envelopes to match.”[1]  The company thrived for many years, but after the death of Mr. Norcross in 1969, the company faltered and was sold numerous times.  According to Earl Ruiter at the Greeting Card Museum, “In 1974 the Company was sold to William Mannion, son-in law of John Dorance, the CEO of Campbell's Soup.  The Company floundered and Mr. Dorance took over the operation until he could find a buyer.  He sold Norcross to Ziff, a magazine publishing and communications firm, which owned it a short time before selling Norcross again to a Mr. Smith, who purchased both Norcross and the Rust Craft Company the same day.  He moved Rust Craft from Massachusetts to Norcross' new West Chester, PA location.  It was downhill for both companies after that.  What was left of Norcross was sold at auction in 1981. “[2]

Other Greeting Card Companies of Note: